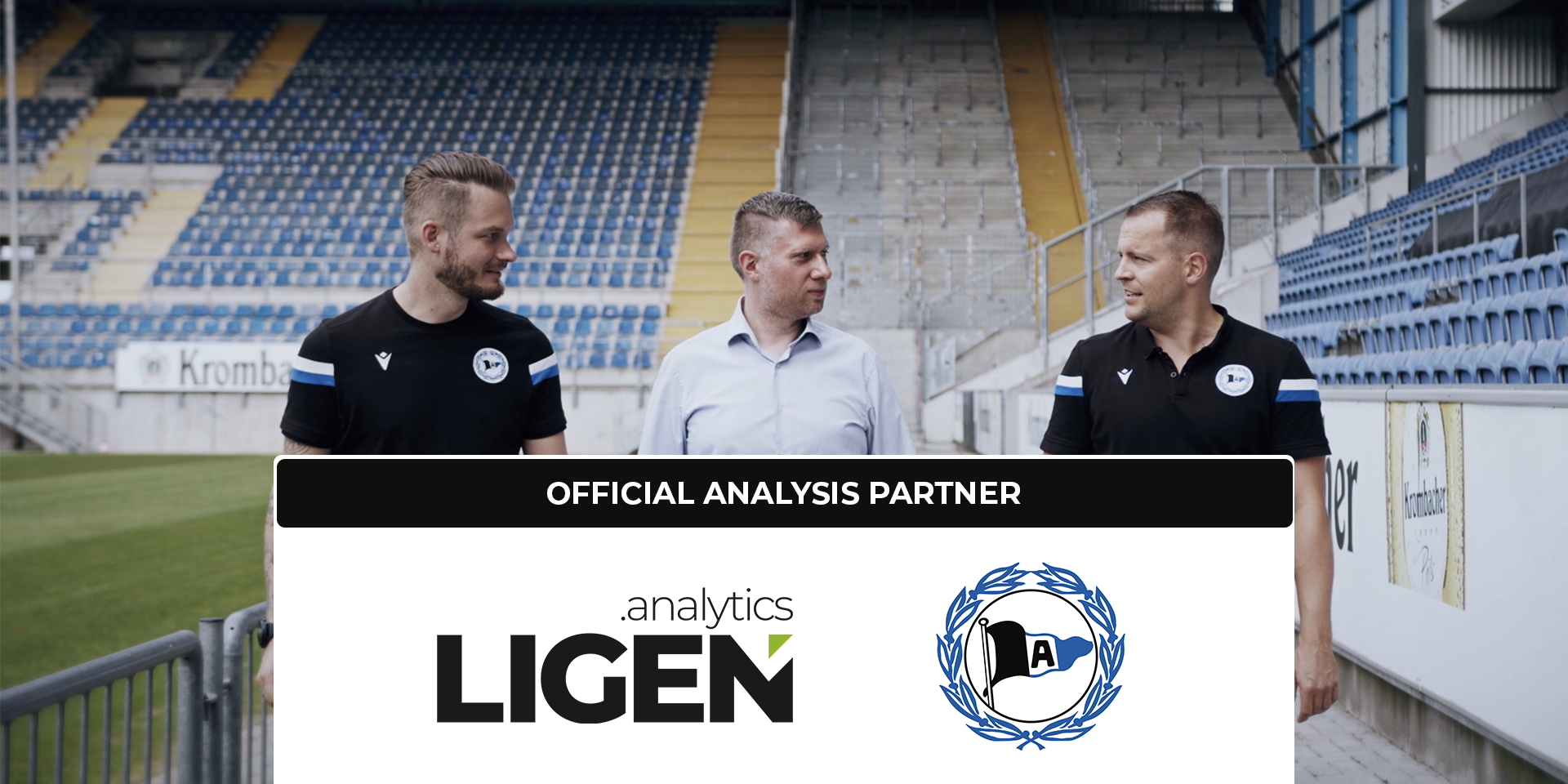 In Arminia Bielefeld, LIGEN.analytics has brought a Bundesliga club on board for an extensive analysis partnership in the youth sector.

Alongside LIGEN’s analytical videos, as Arminia Bielefeld have already used for many years along with other clubs in the Junior Bundesliga, the East Westphalians have been working as part of a closer partnership with LIGEN.analytics since the 2020/21 season, with a particular focus on the area of team-tactical analysis.
“The “AKADEMINIA” – as the Bundesliga club’s youth academy is called – has now started an official partnership with LIGEN.analytics. The cooperation covers team analysis, player analysis, consultation and internal training.

The partnership brings great advantages for both sides: Arminia Bielefeld can benefit from LIGEN’s contextual analysis and their coaching staff can utilise all existing elements of the ADVANCED analysis package to assist them in tactical work. The analysis package consists of manually clipped match sequences, multi-level assessment of all match situations, comprehensive data analysis, statistical evaluations and the interactive platform “Coaching Cockpit”. All elements are used as a starting point for discussions between the academy and the senior team. In addition, internal instruction courses are held by LIGEN.analytics for the further education of Arminia’s coaches and analysts. Arminia also benefit from early test access to LIGEN’s latest analytical developments.
In return, Arminia will support LIGEN.analytics in various footballing projects and will provide important feedback on new products and innovations to assist in their ongoing development.

Furthermore, every match preview on the Arminia website before a Junior Bundesliga game will feature a regular section under the title “Match Facts powered by LIGEN.analytics”, along with the LIGEN logo

“We uncover the context in football using our own unique methodology. Our team-tactical analyses are based on 14 main and 41 sub-categories which operate as part of a multi-level criteria system. All assessments correspond logically with one another and allow contextual conclusions to be drawn. Match sequences are broken down into three constituent parts in order to enable a better understanding of the events that unfold. Moreover, the logic of the follow-up products – in the form of reports, statistics and an interactive platform – is designed to allow each coach and analyst to work according to their own preferred criteria. Using all these tools, it is possible to discover tactical correlations, to correctly understand the mutual influence of both game phases and to accurately interpret the relationship between tactics, fitness and psyche,” as Marcin Gabor, Head of LIGEN.analytics, explains.

LIGEN’s concept of contextual analysis has been met with a very positive response from Arminia. Patrick Romünder, chief analyst at AKADEMINIA, says: “The contextual analysis provides a clear benefit in that we are able to analyse certain aspects of the game much more easily than before. Development in this area had already begun through our collaboration last year, so it’s all the better that we can now officially announce this cooperation.”

In the past, a selection of Arminia’s most talented youngsters had already been closely accompanied in their development. In the next step, the performance of all players in the Under-19 and Under-17 teams will now be analysed. This will enable Arminia Bielefeld to develop their youngsters in a more precise and targeted manner.

For Finn Holsing (Head of AKADEMINIA), the aim is to develop talented players from the region with the ultimate objective of integrating them into the Arminia first team. He says: “Analysis has become more and more important in recent years – not least because of the increased software and hardware possibilities – and these have enabled us to conduct our analysis more intensively than ever before. The solutions offered by LIGEN.analytics make it a lot more fun for us and for the boys on the pitch, because the analysis becomes so much easier. It also allows us to develop players much better.“
Patrick Romünder adds: “Thanks to our partnership, we are able to show relevant clips to coaches and players in real time during training or at half-time during a match and thus offer direct tips for improvement. We want to further expand the way we use contextual analysis with our players and of course continue to train our staff better – LIGEN will strongly support us in this objective”

The most important aspect from Arminia’s point of view, according to Patrick Romünder, is the “very trustful cooperation and communication that has been conducted on equal terms right from the beginning”, and which has proven to be extremely productive. There is “regular dialogue exploring the areas of data analysis and contextual relationships”, as Romünder explains.

Finn Holsing says of the partnership: “We are on the same wavelength and have both taken a similar development: we as an academy have progressed enormously – just as LIGEN have also developed their analytical products and contextual analysis significantly in recent years. In that respect, the two of us embarking on a collaborative journey together was the next logical step.”

Marcin Gabor, Head of LIGEN.analytics: “For us, this is a very important partnership. On the one hand, Arminia is the first Bundesliga club that we officially cooperate with to this level of depth. On the other hand, and even more importantly for me, we can now count on support from our friends at Arminia Bielefeld whenever the situation requires.”